Summer Holidays of the Europeans and Americans

Fewer Europeans will go on summer holidays in 2016 (54%, down 7 points compared to 2015). In comparison, Americans and Brazilians will be more likely to go on holiday than Europeans (61% and 64% respectively).

Conducted by Ipsos at the request of Generali Global Assistance on a sample of 3,000 Europeans (French, German, Italian, Spanish, Belgian and Austrian), the aim of this reference survey - carried out by telephone and published for the 16th year running - is to offer an annual estimate of the holiday plans of the citizens of the countries in question, in addition to their motivations, destinations and preferred types of trips. The 2016 survey was also carried out in the United States and Brazil with a view to comparing practices (samples of 750 individuals surveyed online in each country).

A greater proportion of Europeans will not go on holiday this summer, while the share of travelers in the United States and Brazil will be high.

After picking up last year, summer holiday plans show a significant downturn this year in most European countries. 57% of the French have holidays plans, down 6 points compared to 2015.

The situation appears more positive across the Atlantic: Americans and Brazilians display higher rates (61% and 64% respectively), close to the levels observed last year in the European countries.

The fall in purchasing power in some European countries is having a direct effect on the "holidays" budget item of the most modest households.

The holiday budget appears as one of the most difficult budget item to maintain for the modest Europeans. 21% of the manual workers and retired people declare they will do without it in 2016, vs only 11% of the executives and 13% of the employees.

The trend strengthens in Southern Europe: 35 % of Italians and 26 % of Spanish will not be able to finance holidays this year, against 20% of French and 15 % of Belgians. In contrast, only 6% of Germans and Austrians will be in this situation.

Overseas, Americans plan to slightly limit their holiday expenditure (25%) while the Brazilians will be forced to make more drastic savings (40%).

At the same time, the average budget of those Europeans able to take a summer holiday is overall steady compared to last year.

The average budget for Southern European countries tends to increase this year due to the decrease of the share of modest households' budget: € 2,045 in Italy (+337€ compared to 2015) and Spain 1886 € (+167€). These budgets are however significantly lower than the European average (2,247€).

In terms of destinations, there are noticeable changes compared to last year in Latin countries, where the trend is a reinforcement of local tourism: 64% of the French plan to stay in France for the holidays (+7 points compared 2015), 69 % of Spanish (+4 pts), and 74 % of Italians (+12 pts).

Meanwhile the Germans (36%), the Belgians (39%) and Austrians (51%) will still favor destinations in Southern Europe this year.

Spain, France and Italy are the top three most attractive countries among the European holidaymakers (19%, 21% and 24% respectively), and France remains a favorite destination for Belgian holidaymakers (27% intending to go this year).

Concern about the risk of terrorist attacks remains high, but no higher than in 2015. However, Europeans are noticeably selective about their destinations.

Although the risk of attack is one of the main factors influencing the choice of destination, the level of declared concern varies significantly from one country to another. This factor weights more on the destination choices of the Spanish (47%), of the Germans (43%) and of the Austrians (43%). In France and Italy, the rates are slightly lower (37%). And it is in Belgium that it is the lowest (23%).

Some countries or regions of the world will be particularly avoided this year by European travelers taking into account the risk of terrorism in their choice of destination: North Africa and Maghreb (29%) as well as Turkey (24%).

Destinations avoided by holidaymakers because of terrorism risks depend on countries:

Overseas, the risk of terrorist attacks appears as secondary to the Americans (47%), while the Brazilians are particularly sensitive to it when choosing their destination (54%).
Europe and the Middle East are the two regions the US and Brazilian travelers are giving up on, France being the country most often mentioned in Europe (20% of holidaymakers concerned about the risk of terrorist attacks in the United States and 36% in Brazil).

Very conscious, 54% of Brazilian holidaymakers consider the risk of infection by Zika virus as "essential" in their choice of destination, in relation to the significant spread of the disease in the country.

To a lesser extent, the Americans and Europeans also take into account the risk in their choice of destination, 20% and 25% respectively. In Europe, the Spanish are the most concerned by this risk (34%).

Europe vs America: significant cultural differences in the type of destination sought

While Americans and Brazilians are also very fond of seaside breaks (44% and 52% respectively), on average they are much more drawn to other destinations: 26% of the Americans and 18% of Brazilians will go to the mountains this summer, 27% and 32% to the countryside, 24% and 31% will go touring.

The most important difference is on city breaks: 43% of the Americans and 42% of Brazilians are planning a city stay for their holidays this summer.

Type of accommodation: The French exception, or the success of seasonal rentals

While the majority of European, American and Brazilian holidaymakers still plan to stay in hotels, French respondents are set apart by their marked preference for seasonal rentals: 38% of them intend to rent an apartment or a house for their summer holidays, compared to a level between 20% and 30% in other countries. This practice appears much less developed in the United States and Brazil (18% respectively).

Similarly, French people are more interested in renting holiday accommodation directly from an individual (46% compared to an average of 34% for Europeans, 38% for Americans and 36% for Brazilians).

German holidaymakers are by far the most forward-thinking in terms of booking: 27% of them pay a deposit at least 6 months in advance, twice the European average (14%) and American level (14% also).

Work and social networks: maintain contact or disconnect during the holidays?

Depending on the country, the results from barometer show significant differences in the relation to working time and personal time. The Germans are the most likely to make a clear break from work during their holidays: 80% of concerned holidaymakers declare that they will completely disconnect from their professional sphere. The rate is lower by 10 to 15 points in the other European countries: 69% in France and Spain, 68% in Italy, 65% in Austria. As for the Belgian holidaymakers, they are only 56% intending a complete disconnection.

Overseas, trends differ between the two countries investigated: if the Brazilians are on a similar trend to the majority of Europeans (67%), Americans on the other hand are much less likely to make a total break during the holidays (53%).

In terms of profile, executives and independent workers are less likely than others to completely log off during the holidays (52% and 60%, vs. 70% of employees and manual workers).

As for connection to social networks (Facebook, Twitter ...), the trends are quite similar: The Germans are only 28% to remain connected during their holidays at the same levels, while the European average is 39%. In this matter, the Europeans practices are very different from those of Americans and Brazilians, with 60% and 65% of them would not consider holidays without keeping the link with their social networks.

In terms of use, differences across generations appear clearly:  Those under 35 are keeping much more in touch with their personal network during the holidays than those over 35 (47% vs 33%), even if the need to disconnect is also present in 1 young person out of 2 (53%). 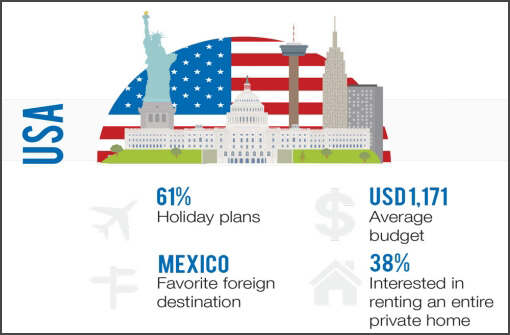